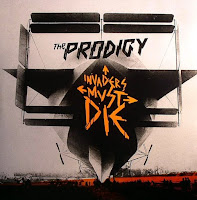 This is probably one of the last times I bought an album simply because it was the latest by an act I followed. The Fat Of The Land is a classic, and had put The Prodigy into the category of bands whose albums I would automatically get. I must have bought this when it came out, listened to it once or twice and then forgot about it.

Why didn't I listen to it? Well, I think in part because on initial hearing, it's a bit Prodigy-by-numbers. You can play spot-the-similarity through the first few tracks; it sounds like Liam Howlett was deliberately referencing his own back catalogue, particularly tracks like "Smack My Bitch Up" and "Breathe". It's also somewhat monotonous; there's not much light and shade, or variations in tempo and mood - just the crushing, trademark Prodigy beats and crunches, and Keith Flint's unconvincing "edgy" attitude.

However, this time round - nearly nine years later - I gave it more time, and I'm pleased I did. Howlett has a superb ear for sounds and his sense of track structure is excellent. Many of the individual tracks are good, but unfortunately the album structure is less well sorted and as a result, it becomes wearing, like being bludgeoned around the ears for forty minutes.

The first three tracks ("Invaders Must Die", "Omen" and "Thunder") merge into each other with little to distinguish them, although it's a good basic sound and I particularly like the title track. "Omen" comes back later ("Omen - Reprise"), when it's much better: slower and moodier. "Warrior's Dance" also has some nice dynamics. Finally, "Stand Up" closes the album with something a bit different, a slower Big Beat kind of sound. (Oddly, I heard it soundtracking a BBC rugby show only a few days ago.)

What I also understand more this time round is the sheer craft. Having dipped a very tentative toe into making music with computers over the last couple of years, and having watched this great deconstruction of "Smack My Bitch Up", I feel I now have a much better appreciation of the talent, application and persistence involved in making music this way. There's so much going on in these tracks, so many tiny little sounds and samples, each of which is carefully shaped and placed.
More pointless drivel from mark