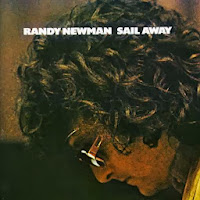 One of the things I really like about listening to albums from the seventies is that they are so short. None of that fifteen songs, 75 minutes of "value" that we were cursed with from the mid-nineties on. Sail Away is half an hour of excellent songwriting that hasn't taken me several weeks to get to grips with.

Randy Newman has a number of similarities with Bob Dylan: both known for their songwriting skills, and frequently covered by other artsists; both possessed of, um, unusual singing voices; and both lyrically some way away from "moon/June" lyrical laziness. (Not that I really care about lyrics, as I've said a number of times before.) However, unlike Dylan (who I can't stand), Newman hasn't made the mistake of assuming that good lyrics (for some definition of "good") can carry a poor song. Newman is an accomplished musician and all the tracks here have good tunes, superb arrangements and distinct identities. I also rather like his singing voice, despite its obvious limitations.

I'm surprised by the number of songs I recognise - in particular "You Can Leave Your Hat On", which I only knew from The Full Monty (I know, a pop anorak really should be better informed), but is better here. Alan Price covered "Simon Smith And The Amazing Dancing Bear" and "Political Science", is on an Old Grey Whistle Test DVD. All are good. I also rather like "Last Night I Had A Dream", mainly for its tune and atmosphere.
More pointless drivel from mark