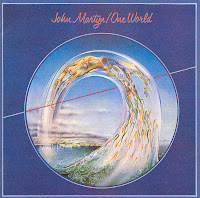 Having previously nominated 1977 as a year zero for modern rock music (and not because of punk, I hasten to add), I've been listening to some of its other releases. Obviously, my theory doesn't stand up to any rigorous analysis, but that's OK because I wasn't planning on analyzing it.

Despite having owned One World for several years I've never properly listened to it before. It shows obvious progression from Martyn's previous albums, particularly his classic trio of Bless The Weather, Solid Air and Inside Out - each getting more experimental, less obviously folk-influenced and less song-based. Here, the songs are mostly reduced to languorous, liquid grooves, over which he weaves his distinctive vocal and guitar. "Big Muff", "Dealer" and "Smiling Stranger" all work like this, and very satisfactorily so; the tracks are built from some wonderfully organic sounds and feel nicely rounded. In fact, the most conventional song, "Certain Surprise", is probably the weakest.

We're also offered a fascinating chance to compare the progress of production techniques with "Couldn't Love You More". Here it's typical mid-period Martyn acoustic ballad, all growling double bass, delicate finger picked guitar and decorative chimes. Four years later, he revisited it on the album Glorious Fool, where it is "treated" to a Face Value-era Phil Collins production, in which you can almost hear the Armani jacket sleeves being rolled up as the fretless bass winds its rubbery way around the gated drums.

Anyway, back to 1977 and One World, which finishes with the beautifully insubstantial "Small Hours", recorded outside apparently (and accompanied by a few roll-ups, no doubt). The album sets a very agreeable mood overall and if it doesn't reach the heights of previous works, is still superb. Ooh - and another knocked off the 1001 Albums list!

Stored in the circular file under 1001 albums, music, review