Hymns Of The 49th Parallel 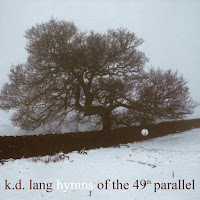 This is, I think, k.d. lang's second album consisting primarily of covers, the first being Drag (1997). Such an undertaking strikes me as unusual these days, where much value is put on originality, and harks back to past times, when Ella Fitzgerald or Frank Sinatra earned their reputations as interpreters of classics. Given lang's ability to transform an established song - "So In Love" on Red Hot + Blue is a masterpiece - and the incredible control and power of her voice, it makes absolute sense that she should choose this route.

The theme here is Canadian writers. In some cases, the songs are very well known, such as Neil Young's "Helpless", or Leonard Cohen's "Bird On A Wire". Covers of classics are always going to suffer from comparisons. In the first case, CSN&Y's original version is (almost) definitive; in the second, there are already superb recordings to compete with. And anyone who covers a Joni Mitchell song ("A Case Of You") does so at their own risk.

Risky it may be, but in all cases, she claims the tracks for herself. Perhaps we could have done without yet another version of "Hallelujah", to which she can add little (or improve on Jeff Buckley's recording), but "After The Gold Rush" is a much improved listening experience over the original. The ebb and flow on "Fallen" (Ron Sexsmith) is immaculately executed. The touch of desperation as she sings "you're chickening out, aren't you?" on Jane Siberry's "Love Is Everything" brings tears to my eyes.

Hymns Of The 49th Parallel is a masterful, beautiful album, understated and tasteful. It develops gradually over repeated listens (it's taken a solid two weeks for me to really appreciate it); the layers of orchestration and arrangement reveal themselves slowly. It is a very grown up, controlled record, and some would probably consider it the epitome of supper club blandness. I think the perfectly judged accompaniment raises it above this; but most of all, the supreme majesty of k.d. lang's superlative phrasing astonishes anew each time through - her performance is in a league apart.
More pointless drivel from mark