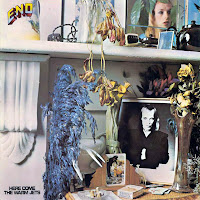 Somehow I have managed to avoid hearing Eno's debut album before, although several friends have mentioned how much they like it. I'm not so convinced. It has a certain playful and whimsical charm in places, but it's a dated curiosity, full of self-consciously quirky songs, singing, playing and subjects.

I like the title track, which is a Neu-esque blast with harmonising fuzz guitars, and was clearly an inspiration for one of my favourite instrumentals, Teenage Fanclub's "Is This Music?". Other tracks have some pleasant melodies, some silly lyrics and some ear-catching moments, but nothing that really stands out.
More pointless drivel from mark