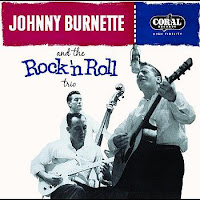 Contrary to my preconceived notions before I started on this project, music in the fifties was pretty sophisticated.  The arranging and recording skill behind acts such as Frank Sinatra and Ella Fitzgerald, or the sheer theoretical knowledge required to properly understand (let alone play) post-bop jazz like Miles Davis's The Birth Of The Cool or Charles Mingus's Ah Um must have been pretty daunting to anyone wanting to join in.  So the rawness of early rock 'n' roll like Johnny Burnette must have sounded as jarring and alien at the time as the punk rock of twenty years later.

Listening to it now, it sounds primitive.  The instrumentation is basic, just a couple of guitars, a double bass and a couple of drums.  The singing, in particular, is untrained, raucous and direct.  But it has an energy and urgency that is missing from the cool, restrained and (above all) professional music coming from the established artists of the time.

Maybe the iconic figure of rock 'n' roll is Elvis Presley (who also released his debut in 1956) but this album is clearly one of the formative roots of rockabilly (they even have a song called "Rock Billy Boogie").  I found it of more than just historical interest; it's very immediate and some of the guitar sounds are really grungy.  Good stuff.
More pointless drivel from mark