In Celebration Of Dead Trees

I saw a post at the Big Green Bookshop (via my friend Paul), which I thought was a nice idea.  Take a photo of one of your bookshelves and write a short paragraph about the book, what it means to you and how it came to be there.

I have lots of books but most of them are now in the loft because we don't have the space to have them all out on bookshelves.  Every few months I take a box out of the loft and swap the books I have out on a shelf for some that I haven't looked at for a few years.  Although I'd rather have all my books out, this system works quite well because it's a bit like having new stuff and I like re-reading books anyway.

Here's what my shelf contains at the moment.  (In fact, it holds another row of books behind those in the photograph, but I'll only mention the ones you can see.) 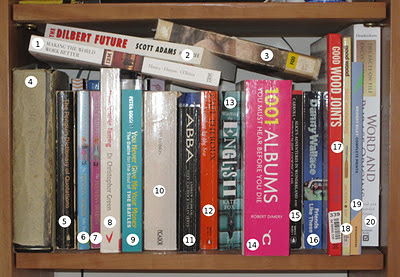 1. Making The World Work Better by Kevin Maney, Steve Hamm & Jeffrey O'Brien (2011)
I'm a little annoyed to have this hagiography of IBM be my first book on this shelf.  It was the only one here that I didn't select myself; all IBMers got one as part of the company's centennial celebration, whether or not they wanted it.  It's also the only book here I haven't read.  I tried, but it's not very interesting.  Could I return it and just have the money please?

2. The Dilbert Future by Scott Adams (1997)
I bought this from a charity shop a few weeks ago, although I'd read it before.  It's mostly light and amusing, but right at the end, Scott Adams takes a break from his usual sarcasm and offers a genuine suggestion for bettering yourself, called "Affirmations".  From what I can tell, it's a kind of new-age, NLP type thinking.  I generally hold such beliefs in contempt, but I do have to admit to trying affirmations once, a long time ago, and they kind of worked.  I couldn't remember what Adams had said about them, so I got the book to remind myself.

3. River Cottage Handbook No. 3: Bread by Daniel Stevens (2008)
I started making bread a few years ago when I bought a breadmaker, and although it was OK, the results never really impressed me much.  So about six months ago, for some reason, I decided to make it completely by hand.  And as far as I'm concerned, if you want to do something properly then you need a book about it.  I borrowed several from the library and most of them were just compendiums of one page recipes, with a little fluff at the beginning about how to knead the dough.  This is different: it goes into deep detail about each step of making the bread.  I love this kind of detail.  I've enjoyed making the bread too and now I make about two loaves a week.  I'll be buying a copy of this if no-one gets it for me for Christmas (hint hint).

4. The Oxford Concise English Dictionary (1982)
In my third year of secondary school (what is now year 8, I think), we were told we had to have a dictionary.  This is what I got.  The custom binding is by me, age 13.  It's now being used by my eldest son, occasionally, which is why it's out.

5. The Penguin Dictionary Of Quotations edited by J.M. Cohen (1975)
On the other hand, I'm not quite sure why this is out on the shelf, since I never use it.  Actually, I think it originally belonged to my parents.  It's fascinating to dip into it though.  And I've always been intruiged by the way it's indexed and catalogued.  That must have taken a lot of work.  And now you can do it so easily on a computer.  This is a bit of a relic, really.

6. The Princess Diaries: Take Two by Meg Cabot (2001)
7. The Princess Diaries by Meg Cabot (2000)
I bought these from the library for 10p each because K (who was 6 at the time) was enjoying the films.  I quickly realised that they weren't suitable for her just yet.  On the other hand, my wife enjoyed them very much and worked her way through the whole series.  Just to be sure.  Anyway, they're being saved for when K is a bit older.

8. New Toddler Taming by Dr. Christopher Green (2001)
Babies don't come with manuals, but of course that makes the aftermarket particularly, uh, fertile.  I think we started with Babygruppenführer Gina Ford, on the advice of my sister, but we didn't really get on with it (and don't get me started about how rubbish it is if you have more than one kid).  So we looked around and found Christopher Green.  He's done three books: this one, Babies and Beyond Toddlerdom.  They're all filled with eminently sensible, down-to-earth advice rather than unachievable timetables and we still use them (except the one about babies, obviously).

9. You Never Give Me Your Money by Peter Doggett (2010)
I bought this book on the recommendation of David Hepworth (via The Word magazine, to which I subscribe).  It's a history of The Beatles, after The Beatles, specifically focussing (I think) on their business affairs.  I've just started reading it, so I can't offer much opinion on it.

10. Clive James On Television by Clive James (1991)
This reminds me of a girl I knew when I was 18.  She was several years older than me; she may have had designs on my person but I was utterly clueless with girls at that age.  She lent me Visions Before Midnight, the first of the three books collected in this omnibus edition.  They contain the TV review columns he wrote for The Observer during the seventies.  I can just about remember some of the later programmes he discusses.  This doesn't stop the reviews being learned, relevant and very, very entertaining.  What he's got to say about the Olympic coverage and (in particular) commentary of 1972 is still true today.  Highly recommended.  (Ruth, I still have your book, btw ...)

11. ABBA: The Name Of The Game by Andrew Oldham, Tony Calder & Colin Irwin
I've loved ABBA since I was six.  My Dad was doing some work at EMI and brought me the first Greatest Hits collection and Arrival.  So this book, which starts with the premise that Benny and Bjorn were two of the finest songwriters - ever! - is obviously right up my street.  It's a very entertaining read too, but for all the humour and obsession with Agnetha's bottom, it has serious points to make about their achievements and history.  Of course, if you're one of those people still in denial about ABBA's place in music history, this may pass you by.  We'll see who's proved right in thirty years time, mark my words.

12. The Kingdom By The Sea by Paul Theroux (1983)
During 1999 and 2000, I spent about 11 months working in Edinburgh.  This was long enough to make friends in the city, but I still ended up alone a lot.  I spent much of that time in bookshops, of which there were many.  I quickly ran out of titles I definitely wanted to read and started taking chances on books that sounded vaguely familiar.  This was one of them.  It's a classic travel book, but I have never managed to finish it.  I can admire its qualities while still finding it a bit of grind.  I'm not sure why.

13. Watching The English by Kate Fox (2004)
This is one of my favourite books.  Unfortunately, repeated reads, while very enjoyable, have resulted in me completely forgetting how I discovered it.  It's like listening to your favourite song again and again; eventually, any memories it had for you are drowned in micro-memories of the other times you listened to it and eventually it reduces any meaning it once had to almost zero.  Nevertheless, I would highly recommend this entertaining study of English manners and habits - in fact, I have recommended it, many times.

14. 1001 Albums You Must Hear Before You Die edited by Robert Dimery (2008)
Bought as part of my grand project to listen to more music.

15. Alice's Adventures In Wonderland & Through The Looking Glass by Lewis Carroll (1865 & 1871)
This book accompanied C & me on our holiday to Florida way back in 2000.  I remember reading it while sitting by the pool at the Holiday Inn on Key Largo.  The juxtaposition of location and story was a little jarring and lent a certain sense of surrealism to the holiday.  It's out on shelf now because the kids are enjoying the Disney film, and K likes the ballet that was on telly a while back.  She doesn't seem to like the book though.

16. Friends Like These by Danny Wallace (2008)
I like Danny Wallace - or, at least, I like the persona in his books, where he has a kind of wide-eyed naivety and innocence.  It may be close to his real personality, of course, or not - who can tell?  But the books are jolly good fun.  He's another author I discovered while I was working in Edinburgh.

17. Good Wood: Joints by Albert Jackson & David Day (1995)
18. Good Wood: Basic Woodworking by Albert Jackson & David Day (2001)
One of my long term ambitions is to make an electric guitar.  As I said before, my instinctive approach is to buy a book about it.  In this case, I already have books about making guitars, but I need basic woodworking skills before I can do that.  So even though I'm several years away from being able to start my project, I'm starting to collect the books.  I might even do a course.  These books were excellent value secondhand.

19. Complete Prints 1962 - 2010 by Bridget Riley (2010)
I first saw Bridget Riley's wonderful patterns at an exhibition at The Barbican in the early nineties and I was immediately smitten.  Since then I've wanted to have some in the house, but I'm hampered by two things: firstly, finding large prints of her work is quite hard; and secondly, C won't have it, because she's not that keen and thinks it wouldn't really work on our walls.  So it's lovely of her to have bought this for my birthday.  The book contains copies of her prints, so it's not the big famous pictures, but it's very interesting nonetheless.

20. Words and Phrase Origins by Robert Hendrickson (2008)
This is another birthday present from C - and, unfortunately, another book that has been somewhat superseded by the internet.  It's much more convenient to refer to than a computer though, but it is rather heavy!

Stored in the circular file under book, books