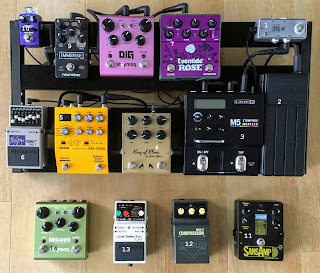 Amazingly, another two years has (almost) passed since I last reviewed my pedals, and there are quite a few new purchases, so it's definitely time to do it again. This obviously doesn't include pedals that have come and gone in between times, including the classic pairing of the Strymon Flint and Strymon El Capistan (so at one point I did in fact own four Strymon pedals), the Source Audio Nemesis, Catalinbread Talisman and Hamstead Odyssey - all top notch pedals, but not quite right for me.
One thing that's fairly obvious when reviewing the previous three of my pedal board posts is I have been gradually drifting towards more expensive items. In 2015 I owned two that cost more than £100, with most of the selection being firmly at the cheap and cheerful end of the market. Today there are three that I paid over £200  for (two of which were secondhand) and three more that would have been over that much new. That said, all but three of these pedals are pre-owned, so in theory I am improving value for myself that way!

Anyway, here they are, in signal path order:

Bright Onion Mini Looper [1]
Still being used as a patch box and mute switch, hasn't shifted since last time.
Line 6 Expression pedal [2] and Line 6 M5
Also unmoved in over two years. The effects I use most often are an octave down, a chorus and a wah. Since collectively those would cost significantly more than this, and take up more space, it stays. Although I am tempted to get a TC Electronics Sub 'n' Up for the octave shenanigans.
Fredric Effects King of Klone [4]
The Electro-Harmonix Soul Food had been on my board for ages, but I'd been wondering about getting a "better" Klon Centaur clone, and this came up at an excellent price. It's not better than the Soul Food it replaced - or worse - but on the other hand this is two Klon circuits in one box, which sounds excellent. I should have hung on the Soul Food though, it was very good at boosting things and had its own character.
BOSS OD-200 [5]
My most recent purchase. I'd been wondering about different flavours of overdrive and this pretty much does it all. I'd tried a Hamstead Odyssey, which is a really nice pedal that has a fair amount of variety, but it had a top end fizz I couldn't dial out - although in hindsight that might have been the H&K Tubemeister amp, which has since been replaced by a Yamaha THR100H. The OD-200 digitally models a dozen drives, fifteen boosts and allows a drive and a boost to run simultaneously. Incredibly versatile, although I haven't played with it enough to know whether it's a keeper.
BOSS GE-7 (ThorpyFX modded) [6]
I had a Mooer Graphic-G which was very compact but didn't get much use the frequencies weren't quite right, and was a bit noisy. The GE-7 is the industry standard, although it's also generally considered to be improvable itself in the noise department, which is why modded versions like that by Analogman are highly sought after. I assume this has much the same updates, in this case done by Adrian Thorpe. Anyway, it's very good. I also like having a "proper" BOSS pedal on the board - it's a design classic.
Eventide Rose [7]
I love delay. My first was a Frontline FD-1200 Digital Delay which got lost ages ago, but my first in more modern times was the MXR Carbon Copy. That started my descent into a bit of a rabbit hole which has ended up here (so far). The Rose is a digital take on a bucket-brigade style delay, but with way more features. It sounds excellent - you'd expect nothing less of a company with the pedigree of Eventide, of course - but it's too new to know whether I'd use all of its capabilities. I suspect that I won't, which leaves me wondering again whether I should have just kept the Carbon Copy! (bit of a theme developing here ...) Fun to try all these things though.
Strymon DIG [8]
This has three different digital delays which do sound different, albeit only slightly. So in practice it's a bit of a one-trick pony - although in fairness, it's a hell of a trick. If I want a single delay I usually go for a more analogue sounding delay like the Brigadier or the Rose, so all this gets used for is bad Edge impressions, which is enough to keep it on the board!
Neunaber Immerse Mk II [9]
I also love reverb, although for a while I decided that whatever is in the amp is enough. However, I really missed the adjustability of a pedal. I tried the Source Audio True Spring, which sounded superb but is only spring reverb (duh) whereas I like plate reverb more. So I moved on the to Strymon Flint, which stayed until very recently and saw off the Catalinbread Talisman. It's excellent but perhaps a little dull, and I couldn't use the tremelo effectively either. So when the Immerse came up on the forum, I snapped it up. So far I'm loving it - loads of different reverb options, all of which sound luscious. Plus it has an "echo" option for when two other delays aren't enough.
Hotone Wally+ Looper [10]

I've had a looper on my board since I inadvertently acquired one in the TC Flashback X4. The BOSS RC-1 wasn't as usable as I expected and definitely muffled the tone, so on a whim I bought this, the smallest looper I could find. It's tiny (see pic) but it has eleven slots for loops and can record something like thirty minutes in each of them. Needless to say, all I use it for it recording simple chord progressions for improvising over. Worth having though, and takes up almost no space on the board. Hotone used to do a whole range of pedals this size - it's tempting to do a whole board with them and compare it!
Tech 21 Sansamp [11]
I've said a few times already that there are pedals I shouldn't have sold, and that's why I won't sell this. It's a classic, it's great at what it does and it was great value for money.
Ken Multi MCP-7 Compressor [12]
I think the only time this comes out of its box is for family photos like this! Pity, as it's a perfectly functional, if shameless, copy of a BOSS CS-2, but the M5 has three or four compressors in it that I'd use instead if that's what I wanted. Worth nothing though, so it won't be going anywhere.
BOSS LS-2 Line Selector [13]
Another utility pedal that is a tool in the box for those moments when I need to split a signal. Have to admit I haven't used it recently though.
Strymon Brigadier [14]
As mentioned above, I got the MXR Carbon Copy and loved it. But inevitably, I wondered if more controls would be better, so I sold it for the Carbon Copy Deluxe, which was a disappointment. So basically I've been looking for something that sounds like the CC, but with more control over the modulation and the feedback. I had the BOSS DM-2W (lovely but lacking modulation on the repeats), the Strymon El Capistan (tape delay not really my thing), this and the Rose above. The Brigadier sounds excellent but the mod control could be better and the oscillation is obviously digital. I suspect this is leading me back to properly analogue delay again - either another CC, or something even more expensive like a full-fat Deluxe Memory Man Deluxe (the 1100 TT is probably the best bet).

Not pictured (but talked about last time):
More pointless drivel from mark