How joining a forum can be dangerous to your bank balance 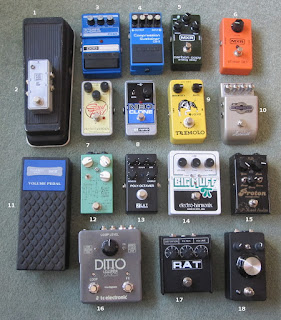 In January this year an equally guitar-obsessed colleague recommended I have a look at The Fretboard - a UK-based forum for guitar obsessives everywhere. As well giving me opportunity to put my level of interest into perspective (very mild!), it also introduced me to a much wider world of guitar equipment than I had previously found in the pages of Guitarist.

It also has a classifieds section. I had a few pedals up until the beginning of this year, but of those on the right, twelve were bought since joining the forum. I sold a few, and sold a guitar too, so I'm not out of pocket ... yet.

Following are some notes about what they are, approximately in the order I bought them, and why I bought them, primarily for my own interest in years to come.