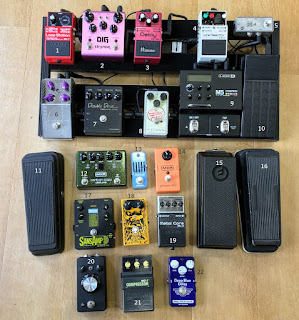 I was re-reading my 2017 pedal survey and was honestly surprised by how many of the pedals I had then have been sold on. I genuinely thought I'd stopped chopping and changing so much! It's obviously time to review again, in what's becoming a biennial exercise. So I gathered them together on our nice kitchen floor (that green carpet is just horrible) and did a family shoot.

At the top are the pedals currently in daily use on my board. Those on the floor are in a cupboard and not used as much. The board itself is a Palmer Pedalbay 60 - not the most glamorous bit of kit but invaluable, even for a strictly home guitarist like me. Because it's all wired up, I just plug a couple of cables in and I'm ready to play. This is helped by a Voodoo Labs Pedal Power Plus, under the board, giving power to everything.

All right, that's the dull (but very useful) stuff taken care of. Onto the pedals themselves!

Bright Onion Mini Looper [5]
This is being used on the board solely as a patch box, otherwise getting the guitar lead into the M5 is awkward. However, it functions as a mute switch for the whole thing as a nice side-effect.
Line 6 M5 Stompbox Modeller [9] & EX-1 expression pedal [10]
"100 effects pedals in 1", they say. I'm a bit ambivalent about this, because I am not patient enough to go through them all meticulously, so it's a little wasted on me. However, for £70 (s/h) it's an absolute bargain and although the quality varies somewhat, all the effects at least good and some are excellent. Consensus on the forum seems to be that the delays and reverbs are very good, but actually I prefer to get my delay from dedicated units. However, I quite like the drives and the Cry Baby Super model ("Fassel") is really close to the real thing. So this regularly gets used as a wah (there are about 5 other wahs also!) and occasionally as something else if I need, say, a chorus, a phaser, an octaver or something else. Having it around gives a lot of options, needless to say.
Electro Harmonix Soul Food [8]
A staple of my board. Every drive I've tried sounds better with this kicking it up the arse. I am very tempted to try a "better" Klone to see if it actually makes a difference. The Wampler Tumnus is very good ... but would you really notice?
Tech 21 Double Drive [7]
This was up for sale earlier this year. No bites though, so I put it back on my board. My thinking was that I would be fine with the amp distortion, but this gives me a lot more options. It's really good - hardly worth letting go for the sake of £40-ish. Currently it's going head-to-head with the ...
ThorpyFX Gunshot [6]
I've never had a "boutique" overdrive and fancied seeing what the fuss is about. The Gunshot gets a lot of love online (as do all ThorpyFX pedals), but possibly it wasn't the best to start with, as it's supposed to be what the cognoscenti call a "MIAB" (according to the man himself) and also loosely based on a Tubescreamer, which doesn't really suit my amp, a H&K Tubemeister 18. That said, the pedal has a lot more range than your usual TS clone. As for whether boutique is worth it - well, predictably, it's about small gains. Having had a chance to try it slightly louder than normal, I think this would be fantastic on a gigging board - it really cuts through and has a lovely quality. At the volumes I normally play and record at, however, I am concerned it's going to be a bit lacklustre.
That's all the pedals in front of the amp. In the loop are:
BOSS LS-2 Line Selector [4]
This is a great multi-purpose pedal. I've used it to run parallel distortion/fuzz, which was good fun. Classically it's used to switch between two separate banks of effects. Right now, it's here to take a feed after the pre-amp but before the delay & reverb effects, and send it into the audio interface. Then I can get the same approximate signal but use delay and reverb in the DAW, while still playing with delay on the signal I can hear.
BOSS DM-2W Delay [3]
I replaced the MXR Carbon Copy with a Carbon Copy Deluxe, but was disappointed in it. So I got this instead. It only came up on my radar recently, for some reason, but someone was selling so I grabbed it. This is the "Waza-Craft" edition, which adds a couple of useful features (longer delay, split dry/wet & expression control for rate) and uprates all the components, apparently. Anyway, it's a superb analogue, bucket-brigade delay. The only thing I wish it had is modulation - although you could add it in if you wanted, by using the separate wet-only output and recombining with the LS-2 (say).
Strymon DIG [2]
I sold the TC Flashback X4 and fancied a boutique delay of some sort - and, to be honest, I fancied a Strymon. They do a number of delays and it was a toss-up between this and the Brigadier - and this came up. It also has two delay engines, so that sold me. Instant Edge! A great sounding pedal, although I can't really tell much difference between the three models.
BOSS RC-1 Loopstation [1]
Having sold the TC Flashback X4, which I as often as not used as a looper, I needed a looper for practice, and this is as straightforward as any. The TC Ditto would have been smaller though.

Dunlop GCB-95 Cry Baby [11]
Someone at work was selling this for a tenner. Bargain! It was missing the rubber stops underneath but I found a pack of replacements at Strings Direct. The movement is a bit shallow and the sound isn't quite the same as my Jen Super but it's OK. However, it's not being used because, as I say above, the M5 works just as well.
MXR Carbon Copy Deluxe [12]
This has been a real disappointment. I loved the original Carbon Copy and the Deluxe looked to have the additional features I wanted: tap tempo and expression control. However, the sound isn't there any more, the controls have very little range and you can't control self-oscillation with an expression pedal because regen isn't controllable with it. It's being sold.
Mooer Graphic G [13]
Useful for specific sounds, although, again, the M5 has various EQ options also, so not used very much.
MXR Phase 90 [14]
Phase is my most-used modulation and I like having it after distortion or fuzz (à la "Eibhli Ghail Chiuin Ni Chearbhail") so this has actually now made it back onto the board in place of the Gunshot.
Moog EP-3 expression pedal [15]
Useful with various effects - it works nicely with the DM-2W and the DIG. Useful for special effects.
Jen Cry Baby Super [16]
I've written about this before and it still needs a new pot. Semi-seriously considering selling it to someone who would actually use it.
Tech 21 Sansamp ("Classic") [17]
I'd been on the lookout for one of these for a while. Apparently it's well used in professional circles for recording bass guitar, and so I tried this, with some success if I say so myself. It also does good guitar sounds. It's very flexible. I'd say overall the sounds aren't super-refined - or maybe I just haven't found the right combination of settings - but for a hobbyist recording, it's superb.
Fredric Effects Unpleasant Companion [18]
Bonkers fuzz, but again probably superfluous for the amount I use it and the fact that the M5 has a bunch of them.
BOSS FB-2 Feedbacker/Booster [19]
Another niche pedal, this time with no direct equivalent that I am aware of. Kept for those occasions when I want to simulate feedback. As a boost, it's somewhat industrial sounding.
Handmade Phase 45 clone [20]
Really smooth phase sounds, more subtle than the Phase 90.
Ken Multi MCP-7 Compressor [21]
Worth nothing and probably not worth keeping (again, given I have the M5) but not worth selling either.
Mad Professor Deep Blue Delay [22]
This isn't actually mine, it belongs to a friend. I did a back-to-back comparison with the DM-2W, and preferred the BOSS. It's a good sound though.
Korg AX1G [not shown]
My first multi-effects and, again, not worth selling really. Not sure what I'd ever use it for though.

Pedals that have come and gone in between this update and the last one are surprisingly few: a Source Audio True Spring (great pedal, but I prefer plate reverb) and a Hudson Broadcast Dual (didn't suit my amp). I bought both of these new, which was probably a mistake, caused by impatience mainly!
More pointless drivel from mark

Stored in the circular file under pedals