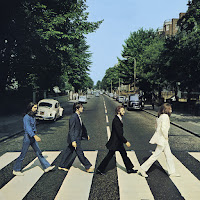 I came to Abbey Road relatively late - which is to say, for some reason I was at least ten before I listened to it properly. Given that at seven I was putting A Hard Day's Night, Rubber Soul and Sergeant Pepper on constant repeat, it's an odd oversight.

Perhaps this late-coming is why it's never been such a favourite as other Beatles albums. It hadn't embedded itself into my juvenile subconscious in the same way. Or maybe it's because ... well ... it's not really quite as good?

For a classic album, let alone a Beatles album, it really does have a lot of filler. Fully half of the first side is bordering on awful. I know they had to let Ringo sing on a track but really, "Octopus's Garden" is just rubbish. "Maxwell's Silver Hammer" is trite and unpleasant. "Oh Darling" just sounds like Paul's trying too hard. It's even more puzzling when you consider that the remainder of those six songs are fantastic, in particular the ground-breaking "I Want You", real heavy music to a ten-year-old.

Then there's the second side. After "Here Comes The Sun" (about as good as a song can actually ever be) and "Because" (disposable) comes the much-vaunted medley. A medley of songs that weren't quite finished or good enough to make it as whole pieces. It actually only starts to make sense with "Golden Slumbers", more than half way through. Then, I'll grant you, it's superb. The duelling guitars on "The End" are just fantastic - and then we get that perfect ending couplet: "And, in the end, the love you take / Is equal to the love you make". (Which they then spoil by having a joke song follow it.)