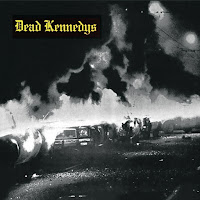 I've known Dead Kennedys tracks like "Kill The Poor" and "California Über Alles" for a long time but never listened to the whole album. But there it is on my "Eighties in Music" list, so now's a good a time as any. It's not available on Spotify so I've had to resort to the lawless wild west of YouTube to hear it.

First impressions: it's full of energy and Jello Biafra's voice is cool in a whiny kind of way, while the music is surprisingly varied. It's obviously a low budget production but that's appropriate for the style. Best of all, it's nice and short. Not in the "thank god that's over" way, just about a dozen short tracks.

Some of the lyrical targets are very dated, some are obscure, but most tracks are musically interesting enough to make listening worthwhile. The singles are good - not least because there's the semblance of a tune: I particularly like "Holiday In Cambodia" because it has a great intro, moody verse and some great playing (although lyrically it's hardly cheery); and "Viva Las Vegas" is great, probably because it's best tune on the album and I know it best. It suits their style, funnily enough, although I'm sure it's all heavily ironic given their known politics.

Not something you'd put on for repeated listens but it's enjoyable because of the energy and it has a place in history, of course.
More pointless drivel from mark