Kings Of The Wild Frontier 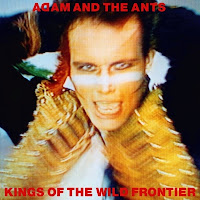 Adam & The Ants' singles were the soundtrack of my early teens and I remember them so well. Despite that, I never owned the albums at the time, 1980 being just a little bit before I started buying records properly. What strikes me now is that the best tracks - "Dog Eat Dog", "Kings Of The Wild Frontier" and, to a lesser extent, "Ant Music" and "Ant Invasion"  - seem to have come from nowhere. They sounded like nothing else at the time and sound like nothing else today - incredibly distinctive, strange but familiar, and executed with an almost infinite swagger and bravado.

The other tracks are hit and miss and are more obvious in their influences. "Killer In The Home" is obviously based on Link Wray's "Rumble", while I'm sure there's also Eddie Cochrane and Duane Eddy in there too. As an album, it's patchy and doesn't really deserve a place in the 1001 Albums You Must Hear Before You Die, but the singles are absolutely essential.

The single and indeed the album were hugely successful (the UK's biggest selling album of 1981, no less) but not imitated - I wonder why not? The time is ripe for a revival, I think!

Stored in the circular file under 1001 albums, eighties, music