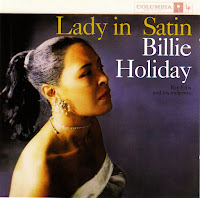 I'm finding this a hard album to love. It's an album of standards, in the same vein as the contemporary Sinatra and Fitzgerald albums. But while those two singers were at the top of their abilities at the time, it's clear that Billie Holiday was at the end of her career, and it's uncomfortable listening to her voice. She sounds tired, and there's an underlying feeling that she might only be doing this because she has to (although from what I have read, this is not the case; she wanted to make this album this way).

Bill Holiday's phrasing is as distinctive as ever, although I can't help wishing sometimes that she'd clear her throat first, and the arrangements and musicianship are first rate. There's not much variation across the tracks and because her voice is so unusual, it also serves to blend the songs together somewhat. The overall result is to make the album a less enjoyable experience for me.
More pointless drivel from mark