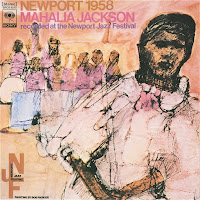 Like most people, probably, I think I'd claim to know gospel when I hear it, but I wouldn't have identified this as such. This is just Ms. Jackson singing by herself, with minimal - but effective- backing instrumentation, primarily from a piano and occasional organ. Where's the mass choirs and fevered chanting?

All of which shows how much I know. My entire knowledge of gospel is the five minutes it takes James Brown to sing "The Old Landmark" in The Blue Brothers, so it's fair to say that I am not the best informed about the subject. Listening more carefully, as well as the obviously church-based lyrics, the chord progressions are very typical of gospel - at least, I assume so, because it sounds like early soul. What is striking is how funky some of it is, and you can see the direct line from "I'm On My Way" to Ray Charles's "Hallelujah I Love Her So", and from there to the sixties' twin peaks of Motown and Stax.

Mahalia Jackson's voice is fantastic and the whole thing sounds great fun. She's also sweet when the audience is clapping and she says "You make me feel like I'm a star" - although surely she was, since otherwise why would she be at Newport Jazz Festival, for the second time?

Needless to say, this isn't something I would have chosen to listen to or even known about had it not been in a list in a book, so I'm grateful to have been exposed to it. I'd even probably listen to it again some time.
More pointless drivel from mark