I haven't been listening to previous purchases as much as I expected, and probably haven't given them enough of a chance if I'm honest. So this time round I decided I would buy fewer albums and divert some of the cash into a pedal (or two) on Denmark Street. Nevertheless I still found myself browsing and taking a chance on a few albums. Here's what I ended up with this time:

Green Onions by Booker T. & The MG's (1962)
Soul Limbo by Booker T. & The MG's (1968)
I have McLemore Avenue by these guys, their own take on Abbey Road, and it's nice stuff. I thought a couple more in the same vein wouldn't go amiss.
Whirlpool by Chapterhouse (1991)
A shoegaze classic of course, but one that I don't really know, as evidenced by the fact that when I got home I realised I already owned it. Doh!
Garlands by Cocteau Twins (1982)
Early 'Twins that I don't have in my collection, despite having been a big fan for a long time.
Wheels Of Fire by Cream (1968)
Odd half studio, half live double album. Some great tracks but feels a bit contract filler to me.
Crosby, Stills & Nash by Crosby, Stills & Nash (1969)
A classic album, which is probably why I already own it. I must be getting old.
Alice's Restaurant by Arlo Guthrie (1967)
I've known this for ages thanks to dad, and it's a bit of a classic, or at least the title song is.
The Inner Mounting Flame by The Mahavishnu Orchestra with John McLaughlin (1971)
This could be either superlative, influential guitar jazz-fusion or utter tripe.
Octahedron by The Mars Volta (2009)
Modern prog, as far as I am aware.
No Room For Squares by Hank Mobley (1963)
I'm a sucker for Blue Note covers. Hey, who isn't?
A Moon Shaped Pool by Radiohead (2016)
One of the finest bands ever, full stop.
I Wasn't Born To Lose You by Swervedriver (2015)
Swervedriver have possibly the best name in rock, and a great back catalogue. Whether this reunion matches up remains to be seen.
Future Disco Vol. 8 - Nighttime Networks by Various Artists (2015)
Can't go wrong with a bit of disco, although I imagine this isn't really the same. Happy to have a listen at £2 though! 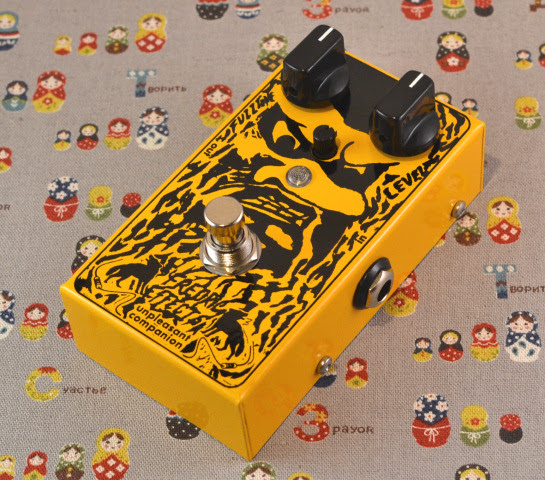 What pedal did I buy, you ask? Well, thanks for asking. After spending an enjoyable hour or so browsing along Denmark Street (possibly for the last time ever if what I've heard about it's redevelopment is correct), I splashed out on the utterly bonkers Frederic Effects Unpleasant Companion, a superb remake/update of the "legendary" Shin-Ei FY-2 Companion Fuzz (no, I'd not heard of it before either).
More pointless drivel from mark