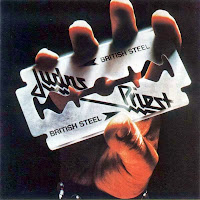 From what little I know about Judas Priest (and I tried not to prejudice myself before listening by reading lots), they mark a junction between "rock" and "metal". Certainly you can hear both in the music on British Steel. "Living After Midnight", for example, could be Whitesnake - a big, stadium-friendly anthem about staying up all night (like a proper grown up and everything!), with big chorused guitars and a medium widdly but forgettable solo. On the other hand, opener "Rapid Fire" is, appropriately, a very fast metal chug, and much more interesting.

I think the real point here is that this album significantly pre-dates both the stadium rock of Bon Jovi or any other hair metal bands, and the more thrashy bands like Megadeath, Anthrax and so on. So although this album might sound slightly dated now, it was clearly very influential. And if that's so, I'm just grateful that it was tracks like these that proved so, rather than the, frankly, over-pompous "Red, White & Blue" or the comedy lyrics of "The Rage" (no surprise to find that singer Rob Halford came out many years later).

I'm no expert on all these micro-genres, because I find metal in general a bit juvenile. Don't get me wrong, I'm a big fan of loud guitars, but metal's posturing, "attitude" and shrieking puts me off. British Steel, though, is surprisingly listenable. The songs mostly have memorable tunes you can sing along with, and Halford mostly stays in a lower range (although he can hit the high notes too), which I definitely prefer. The twin guitars of Glenn Tipton and K.K. Downing are big, crunchy and wild. Good fun for a while, but probably superseded by later artists.