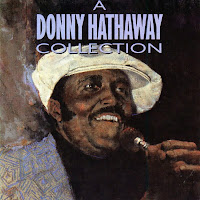 I'm a bit of a snob about compilation albums1. Most artists recording after about 1970 conceived their albums as complete artistic statements, or at least they aspired to, and a compilation tramples all over that. It's like taking your favourite bits from all of Picasso's paintings and making a collage of them. It might be striking, but it won't be a coherent whole.

Of course, my view is probably hopelessly outdated in this era of downloading individual tracks. The kids are busy creating their own unique compilations and not giving a monkey's about the artistic compromise involved. And, truth to tell, compilations have always had a place. My first Bowie album was ChangesOneBowie, on cassette, and the 13 year old me loved it without worrying about what sense it made. I have all the proper albums now, of course, but it served a purpose as an introduction.

I heard about Donny Hathaway on the Great Album Showdown, when Martin Freeman and Danny Baker competed to out-enthuse each other over one of Hathaway's albums. I'm pretty well read about music (albeit less so about black music), but his name wasn't one that instantly rang a bell. So when I came across this compilation for pennies on our shopping trip, it seemed a good opportunity.

As it turned out, I already owned some of these songs: "Where Is The Love" and "Back Together Again", wonderfully harmonised duets with Roberta Flack, both appear on Flack's Softly With These Songs (yes, yes, a compilation), which I've owned for years. Hathaway's solo material is generally much slower and deliciously moody: I particularly like "Giving Up" and "I Love You More Than You'll Ever Know", both of which have a real late night, soulful, mournfulness that you can just wallow in. His voice is a classic soul/gospel instrument, reminiscent at times of Stevie Wonder ("The Ghetto" in particular reminds me of Wonder's "Living In The City" - no bad thing).

Donny Hathaway only recorded four albums, including one of duets with Roberta Flack, and so having had my introduction - and thoroughly appreciated it, too - I will definitely be going for the proper albums now. Anyone want a third hand compilation?


1 Note for non-British English speakers: in this context, "a bit" means "a lot". For further education about understanding British English phrasing, see this handy guide.
More pointless drivel from mark