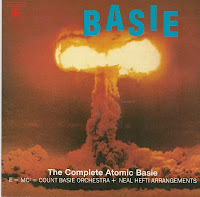 It's impossible not to compare this with Duke Ellington's Ellington At Newport. To the uninitiated - me - there is precious little difference between them. I believe that Ellington's band is the older, for what it's worth. But they both played big band swing, jazz with a driving rhythm. They both have leaders with assumed titles who play the piano. And they both produced classic albums towards the end of the fifties. This is the Count's.

It is a great jazz album, but not quite what I expected. Although there is improvisation, there's less emphasis on it and more on the tightly arranged, punchy ensemble pieces. If you've never heard it before, then think about the theme music for Top Cat or The Flintstones - that brassy riffing and infectious swing. The up-tempo tracks are the ones that initially grabbed my attention, the opener, "The Kid From Red Bank" being an excellent way of starting the album, while "Double-O" builds nicely and contains the most traditional jazz solos on the album. The subtler tracks are good too, although it took me a few listens to get past the immediacy of the noisier songs. All in all, great stuff.
More pointless drivel from mark