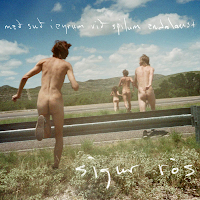 Over lunch a few days ago, we pondered the question: is it necessary to be able to understand lyrics in order to enjoy a song? One of my friends argued that it wasn't; the enormous success of Western pop music in Japan proves this, happily sung phonetically in a thousand karaoke bars. In any case, he continued, most pop lyrics are banal substructure for important things like melody, phrasing and the like.

On the face of it, this makes sense and I should agree with it. I rarely listen to lyrics, and I don't think they're important at all. Often, lyrics are cryptic to the point at which they might as be in a foreign language. Right now, I'm listening to one of my favourite songs, "John Cope" by Talk Talk. The lyrics are minimal and meaningless to anyone who isn't Mark Hollis. It doesn't stop the song being brilliant.

Despite this, I regard it as fact that, for a song to be a success, it must have lyrics and they must be in English. In support of this, I present this, the fifth album by the popular Icelandic "ambient/post rock" (it says here) beat combo Sigur Rós. I found it to be very enjoyable, pretty music, well constructed, full of interesting melodies and accomplished playing. Yet, even though I've listened to it several times, I couldn't hum it to you now. Why is this? Could it be that it's mostly sung in Icelandic?

I think it might. Without identifiable linguistic pegs for the notes, it becomes a bit formless; effectively, instrumental music. Not that there is anything wrong with this - see my favourite instrumentals - but a song without lyrics needs to be superb to succeed, and I don't think any of the songs on this album work quite well enough.
More pointless drivel from mark