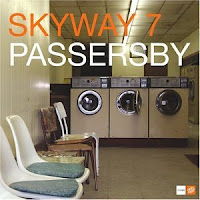 For an album bought on the decidedly shaky premise of an interesting cover, this hasn't worked out too badly. I literally knew nothing about Skyway 7 before I bought this, had never even heard of them. I don't know much more now, beyond the alleged fact that it is a nom de studio of one John Roberts (source: last.fm).

It's a gentle, doodling sort of album, with hints of a whole lot of different ambient-y artists like Zero 7, Air or Lemon Jelly. "Forgotten Ones" sounds like Mr. Roberts has been listening to The Durutti Column. "Good Friends" reminds me of The Beta Band. The more noodle-y sections remind me of Ed Shearmur's musical inserts for Martha, Meet Frank, Daniel And Laurence (a superb film and a good soundtrack too). So, since I like all the cited references, this works out as a decent-ish sort of album for me.

However, it's difficult to pick a favourite track from this album. None of it is unpleasant and much of it is a perfectly nice way of passing the time. I can't imagine it becoming anyone's favourite album, though. And with so much other, better music to listen to, I can't imagine coming back to it. Sorry, John.