I went to university in Manchester, way back last century sometime. In my second year, I lived with two other guys in a small terraced house in Rusholme. We all played guitar, and so every now and then we'd gather in the biggest bedroom with our guitars and have a jam session. Usually it sounded cacophonous, but occasionally it would gel, usually around a simple, descending, Hawkwind-esque riff. We'd set the phaser to a slow swirl and be off for hours. It was fantastic fun to play ... but, er, possibly somewhat less fun to listen to.

This week I was back in Manchester on business and my good friend Pat - one of my fellow junior Dave Brocks annoying the neighbours twenty years ago - suggested that we take in a gig during my stay. So that's how I ended up at the side of the stage in the Night & Day Café, watching two tall, heavily bearded men pound their artfully retro (or possibly just cheap) semi-acoustic guitars to produce a wall of white noise. This, ladies and gentlemen, is the Archie Bronson Outfit. And I was thinking, "We used to do this!"

As guitarist, I know it's easy to thrash a few chords through a couple of decent effects (say, a Pro Co Rat and a MXR Phase 90) and produce an impressive racket. It was clear from my close vantage point that the Archies were doing a good deal more than this; they were tightly in sync (apart from a couple of wobbly moments slowing down at the end of songs), the arrangements showed thought, planning and rehearsal and the singer was trying to say something. Unfortunately, all subtleties were lost in a terrible sound mix that rendered the vocals all but unheard and collapsed the guitars into a mush. 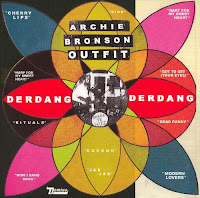 I've listened to their most recent album Derdang Derdang and it's full of some excellent guitar interplay, contrasting patterns and riffs playing off each other. Occasionally it's a little lifeless, but you can hear the details of the instrumentation, the arrangements and the vocals. Clearly these guys have spent a lot of time getting the music to this state. So I think it's a shame that the live experience was so unrepresentative.

You know, call me an old fuddy-duddy if you will, but I think most gigs are too loud. I know it's a challenge to be heard over an enthusiastically played set of drums, but it's got to be possible to get a better fidelity of sound that this in a small bar. A lot of clever people have spent time working on sound reproduction over the decades, so why do we still have live mixes that are clipping all the time and burying finesse in a welter of (unwanted) distortion? Maybe it's just done like that because, well, that's how it's done.

Still, they were well received and there were some very enthusiastic people down at the front (including a couple of girls who looked they were dancing at a disco and clearly knew all the songs). And I'm pleased I went. I don't go to many gigs these days (actually, I never did in those days either), so it was good to be reminded what it's like to experience music physically as well as aurally. The drums really got a good thumping and every beat on the bass drum went right through me. Meanwhile the guitars produced a dense texture of squalling, shifting riffs that seem to be coming from everywhere at once and the singer bellowed indistinguishable lyrics into a mike. The overall result was fiercely energetic and and fun to experience - for a while anyway. The gig was short; maybe half a dozen songs, then an encore, but that's OK, they didn't outstay their welcome for me. And I got back to my hotel in good time. So thanks for that guys.
More pointless drivel from mark