Who Knows Where The Time Goes? 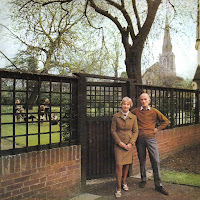 It's difficult to know what to say about this that has not, probably, already been said, and better than I can say it. But that's not going to stop me attempting it.

This sublime, elegiac, melancholic recording is an absolute classic. It was written by Sandy Denny when she was only 20, and has been recorded many times; the definitive version is that on Unhalfbricking, sung by Denny herself. It expresses a limpid, listless acceptance of the passage of time and a shrugging, world-weary acceptance of the impossibility of recapturing past times and lost youth.

Or not. The best art is a mirror. Maybe, at my advanced age, that's how I see it because it reflects my own sense of the futility of life.

But it really bears repeated listens. In the final verse, the mood shifts so subtly that you might miss it (well, I did, because I'm crap at listening to lyrics), to embrace the constant forward movement and encourages us, gently, lovingly, to make the most of what we have, here and now.

With a melody so beautifully formed and a voice so perfectly matched to it, the best that any accompaniment can really hope do is to keep out of the way, but the sensitivity of the rhythm section to the ebb and flow of the sentiments is marvellous, and Richard Thompson weaves a delicate, ornamental counterpoint throughout.

All in all, a transcendental experience. Mike Harding says that you could just listen to this track rather than read all of Proust's À la recherche du temps perdu. Having somehow, and ironically, failed to find the time to read those seven volumes, I can't say. But I know what I'd rather do.
More pointless drivel from mark