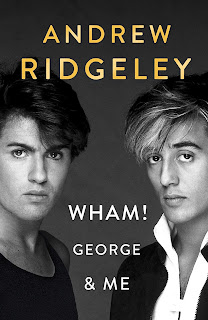 Wham! were a part of my teens by default really; despite the fact that I was never that bothered about their music, it's an indelible part of my history. (And in fairness, it's grown on me and I can get quite into "The Edge Of Heaven".) The fact that they grew up not that far from me wasn't something I knew at the time, although it's quite fun to see the familiar landmarks in the early pages of this book.

I suppose they're now increasingly known as the band that George Michael was in before he became a global superstar, but he's gone and this is their story, by The Other One. Andrew Ridgeley sometimes gets an unfair amount of stick for being a passenger - and given his achievements since Wham!, you might even consider that epithet justified. But really, anyone who has the sense to walk away from celebrity strikes me as a much more balanced individual than someone who carries on, continually trying to prove something. He had about five years in the limelight and then more than thirty years of probably very comfortable living off the back of it. That's a deal I'd take.

It's still a bit of a puzzle what Ridgeley actually did in Wham! He was the driving force behind originally getting a band together, he says, and he had a hand in some of the early songs (apparently he still earns a handsome amount from the sales of Careless Whisper every year), but by his own admission, he handed the creative reins to Michael fairly soon into Wham!'s short life. But again, you could regard this as the action of a normal person. With what seems like a lot less ego to satisfy than most "stars", he says he could see how good George Michael was becoming, and was happy to take second place to him.

That said, Andrew Ridgeley obviously has enough of an ego to want to finally put his side of the story, and I was interested enough to read about it - in fact, I got through it in a couple of days. But although it's easy to read, the book is curiously un-engaging. It seems obvious to me that it's been ghost-written (even though there's no other credit), as the writing has a bland, practised, tabloid-esque glibness that obscures any sense of the real person, which is a shame.

What does come across is the story of an ordinary, normally talented teenager who was lucky enough to be best friends with the boy who became George Michael, and who got to live that life for a few years, and then went happily back to semi-obscurity. Good for him, I say.

Stored in the circular file under music, reading 2020