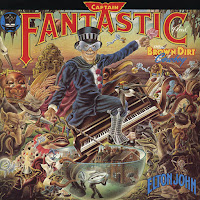 I'd always lazily assumed that I knew most of Elton John's output, or at least the good stuff from the seventies. But here's an album from two years after Goodbye Yellow Brick Road and I only know the sole single from it, "Someone Saved My Life Tonight". The remaining nine tracks are entirely new to me.

One problem - OK, my problem - with listening to an album that contains a mixture of the very familiar and the unknown is that it's too easy to judge the new tracks as inferior because they haven't had time to "bed in" to my mind. So I've given this a few weeks on fairly heavy rotation, which solved the first problem, but has revealed another: it's a concept album.

Actually, I was aware of this before I listened to it, and in any case, I have nothing against concept albums in principle. Hopefully we're well past the idea that they are all bloated, indulgent nonsense (thought in fairness, plenty are). Some of my favourite albums have a clear theme: The Nightfly by Donald Fagen, Marvin Gaye's What's Going On or even, according to some commentators, Goodbye Yellow Brick Road itself.

In all these cases, the theme isn't allowed to affect the quality of the songs, however preposterous the story is (hello Tommy!). Here, though, it doesn't help that the story in this case is - apparently - Taupin and John's own story. I say "apparently", since the references are fairly opaque and you'd have to be very familiar with their lives to know. Without that knowledge, the lyrics become fairly meaningless. Again, don't get me wrong: lyrics are very much a second-class citizen in my pop world and I really don't insist on them meaning anything. But somehow these seem to promise meaning without delivering it.

It seems like the concept has been given too much priority over good songs - like Elton and Bernie wanted so much to get their story out there that they forgot that, for everyone else, it's not that interesting. Maybe that's what happens when you've become superstars. It sounds like the story came first and the tunes were bolted on afterwards. I know in some respects this is actually how the pair worked: Taupin delivered the lyrics and then Elton put a melody round them - but usually the music would be sympathetic to the lyrics. Here it sounds like Elton had some tunes knocking around already and just thought they would do. As a result, while there might be a lyrical theme, musically the album is all over the place.

Having given it a lot of time, I can hum along with most of the tracks and Elton's a proven tunesmith so there's plenty to enjoy from that point of view. But nothing's grabbed me particularly and I wouldn't call it a classic.
More pointless drivel from mark