Before And After Science 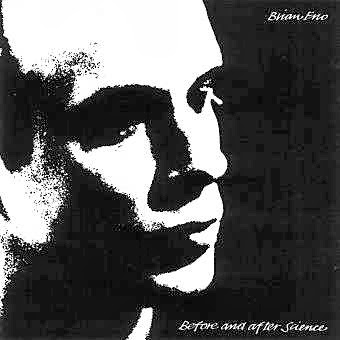 I'm finding Before And After Science to be a more interesting album than Here Come The Warm Jets, but it's still a patchy affair.

Much of the first side reminds me of something else - and usually something better. "No One Receiving" sounds like Station To Station-era white funk, only less convincing. "Energy Fools The Magician" sounds a bit like a cross between Jaco Pastorius' first solo album and Miles Davis circa Decoy or Tutu, which is no bad thing, but it's a bit directionless. "Kings Lead Hat" is obviously Talking Heads (in anagram and sound) - scratchy, antsy and funky, just not quite as good. It's fitting that Eno should then go on and produce them though.

The second side is more relaxed and less derivative and better for it. None of the songs stand out particularly, but are nicer in mood and sound and provide a more rounded listening experience. Again, none seem to go anywhere much but it's easier to forgive here.

To be charitable to Brian Eno, I think much of Before And After Science would be classed as experimental, which from what I know of the great man is more likely to be what he was aiming for than popular, polished or commercial. Unfortunately, it doesn't make for something that rewards me for repeated listens.
More pointless drivel from mark