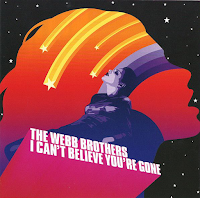 I didn't realise this was a single when I bought it, but at least it's a nice easy way into my first impressions series, with only three songs to concentrate on.

My first impression is that it is heavily reminiscent of Jason Falkner's Can You Still Feel?, that  kind of sophisticated post-Jellyfish power-pop that is so often gets critical adulation and little sales. It's got a great chorus melody, some nicely hook-y arrangement and a well-though out structure. I'd listen to it again. The acoustic version of "I Can't Believe You're Gone" is the third track here and is in some respects nicer for being less overblown, but the song stands up to the two different treatments well.

"Blame It On Yourself", the second track here, separating the two different versions of the single, is clear B-side fodder, a slightly weaker track that nevertheless makes me want to go and listen to the source album Maroon - which I suppose is the point!

Stored in the circular file under first impressions, shopping 18-09-2021