Presumably, "well compiled, written and designed" is too mainstream 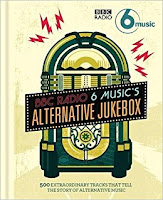 BBC 6 Music has been called a "dedicated alternative music station", although it prefers to describe its music policy as including the "cutting edge" and "ground-breaking" music of today and the past. Unfortunately, defining any of these terms is a bit like nailing jelly to a wall. Jeff Smith and James Stirling (respectively, Head of Music and Editor at 6 Music) give it a bash in the introduction by referring to an "alternative spirit", but this hardly improves our understanding.

The patchiness of the choices doesn't help us either. Giant mainstream hits rub shoulders with wilfully obscure world music. Obvious tracks that form the bedrock of today's "indie" mentality are overlooked in favour of below-par album tracks. It's all very odd.

For example, the only Velvet Underground track included is "Who Wants The Sun", a trite piece of pop whimsy from Loaded. Granted, that's an alternative to the usual VU classics, but not a very good one. If someone's coming to "alternative" music for the first time, they'll need to know about "Venus In Furs" and "I'm Waiting For My Man" - or, if you must, "Sweet Jane" and "Rock & Roll". Listening to "Who Wants The Sun" won't give any insight into an alternative spirit, or into why VU are so revered.

There are a number of selections from 6 Music presenters but otherwise no mention is made of who chose these tracks. However, poor Lloyd Bradley was clearly then handed a giant playlist and given the daunting task of saying something meaningful about each one. Too many of the brief write-ups are ham-fisted and it seems clear that he was struggling; there's no NME cliche left on the shelf, or trite observation left unsaid.

So a patchy selection is then poorly served by what's written about them. To cap it all off, the design and layout of the book appears to have been done by sixth formers who have just discovered clip art. It's a bit tacky, a bit cheap and a lot unsuitable.

There are many tracks here I've not heard before and working my way through the playlist on Spotify is good fun. But the book is below par. Just listen to the songs.
More pointless drivel from mark

Stored in the circular file under reading 2017