A multi-millionaire plays with his toys 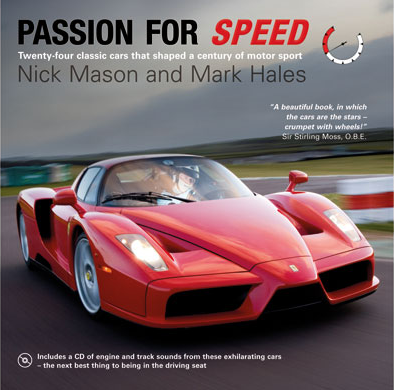 I thought that Passion For Speed would just be a glossy coffee table book with pretty pictures of Nick Mason's many fabulous cars. And it is - but it's more too. In fact, it's a lot more than that: essentially a detailed track test of each car, arranged in chronological order from a 1901 Panhard B1 to a 2003 Ferrari Enzo.

It could have been rather dull or even just an excuse to get Pink Floyd and/or car enthusiasts to part with their money. However, it's clear Nick Mason is a huge car nut and wants to actually tell us about the cars in detail, and thankfully the book is really interesting. Nick provides an short piece on each car, describing why he bought it and what he's done with it. Mark Hales provides a much longer insight into what each car is like to drive; how it grips, how it steers, its quirks and foibles. Since the cars are discussed in chronological order, you get a real sense of how the technology developed - from the initial, primitive designs (the Panhard, a Bugatti Type 35), through the pinnacle of pre-aerodynamic, pre-big rubber (the classic Ferrari 250 GTO) and up to recent hyper cars like the McLaren F1 GTR.

In between there's a real range, including an astonishing BRM from 1953 which has a power to weight ratio (and resultant acceleration) unmatched until twenty years later, and only then in Formula 1 cars; the iconic Maserati 250F (the "perfect" front-engined F1 machine); a bunch of racing and road Ferraris, and even a early 80s Tyrrell F1 car. My personal favourite is the legendary Porsche 962, a thoroughbred bruiser of a racing car and utterly invincible for decades.

Nick Mason seems to buys cars like the rest of buy clothes - in fact, I'm pretty sure he has more cars than I have socks. It's an admirable collection (the cars, not the socks) which serves to emphasise how incredibly successful Pink Floyd were - although he still manages to get a (good-natured) gripe in about how drummers are lower down the pecking order than singers and guitarists - he had to wait until after Eric Clapton and Jay Kay for his Ferrari Enzo, the poor lamb. But for allowing his cars to be actually run and raced, he deserves full marks.
More pointless drivel from mark

Stored in the circular file under books, reading 2014