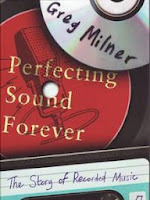 Perfecting Sound Forever (the title is taken from a Pavement track) is a look at the technological history of recorded music, from wax cylinders to software codecs. It's fascinating to revisit the analogue vs. digitial debate in the context of similar debates down the decades: cylinder vs. disc, acoustic vs electric recording, 33 vs 45 - there's always been people prepared to swear blind that their method of sound reproduction is better. (More amazing is that there are people who will defend the original acoustic wax cylinder - and even more still that they might, according to the author of this book, have a point.)

What is also interesting to any student of rock and pop is the detail of how the advancing technology has shaped the sound of the music we listen to. It's well known that the advent of multi-track recording enabled more advanced and creative uses of the studio in the service of music production (as opposed to merely music recording). However, what I hadn't appreciated was how the increasing number of tracks changed the music; both by reducing fidelity - 24 tracks on a 2 inch tape is less accurate than 16, for example; and by changing the practice of recording - why bother getting a perfect performance when you can piece it together from several takes? This latter is taken to extremes now that software allows an infinite number of tracks, but was also responsible for the sound of late seventies rock - that dead, dry, pristine sound perfected by Steely Dan, and caused the separation of instruments required to allow the editing to work.

There's a very interesting chapter on the way that the "loudness war" has further deteriorated the fidelity of what we listen to as a direct result of the greater dynamic range available with CD, and a discussion of how even more technology allows us to reduce fidelity yet again by tricking the brain into hearing what's not there - the era of the lossy compression algorithm (MP3, Ogg Vorbis, AAC and so on). It's difficult to avoid the ironic conclusion that all the advances have failed to advance anything with respect to the accurate preservation (that is, the other sense of "record") of sound.